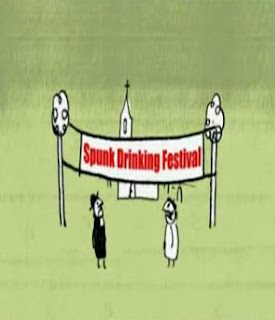 I believe it was William Shakespeare, in his seminal work "A Christmas Carol" who said "You scumbag, you maggot, you cheap lousy faggot, happy Christmas your arse".

Wise sentiments indeed. Christmas is, unless you are a child or afflicted with water on the brain, a right royal pain in the hole.

Still, as long as there is strong drink, the prospect of inappropriate Christmas Eve touching and the dearest of festive countdowns, it may just be possible to salvage something from the wreckage.

Charge your glasses, kiss your lasses and smother your nuts in molasses, for, lo! the Christmas Ins and Outs am here!

Claiming to have a mate who saw active service as part of a Bosnian death squad and declaring him to be a "bloody good bloke, actually".
Saying the most banal of things, such as 'I think I will take a shit', in the style of Alec Guinness in well known bairn's fillum 'Star Wars'
Watching 'Loose Women' and reckoning you'd stand a chance with at least three of them.
Habituating down-at-heel watering spots frequented by cow-punchers, minge-munchers and liquid-lunchers.
The good people at Cancer Research and Barnardo's, catering to the nation's disposable pen and refuse sack needs in these trying fiscal times.
Turning up drunk, claiming to have been "getting busy with the fizzy".
Capering with delight.
Solemnly confiding to close friends and family that you will have no truck with the remainder of "X Factor" since they got rid of that "sort with the big cahoonas".
Generous teenage mums who dump a baby in a phonebox near Christmas, enabling hospital staff to give it a festive name such as Robin or Eve and providing TV and print journalists with a heart-warming Christmas story which doesn't take them too far from a pub.
Pairing a button-down collared shirt with a round-necked sweater.
Stockpiling carrier bags ahead of the awful day when those pricks at Asdas try to chisel you out of 5 pence a pop for them.
A Christmas list that asks for "a kite, Beano and Oor Wullie annuals, remote control car, Humbrol paints and an eighth of Moroccan hashish".
Telling a lass in a bar that you were once in Heartbeat and revealing exclusively that Nick Berry was "a bit stand-offish".
Sour-facedly turning down invitations to four, count 'em, four Christmas "dos".
A propos nothing, prefacing one's remarks with the phrase "As Minister Farrakhan says..."
Spending the entire holiday period holed up in one's home, surviving only on Dundee cake and Advocaat.
Being frankly unable to muster much optimism regarding Co Stompe's prospects in the forthcoming Darts world championship.
Vapouring on airily about the ski-ing at Chamonix despite your experience of mountain sports extending as far as sliding down pit heaps in a black bin bag.
Repairing to one's study with a large balloon of fine old armagnac and the new "Man About the House" DVD box set.

Any reference to the time you spent behind bars, wearing a ballgown and a blonde wig and peddling your tush to your cellmate and protector, a white supremacist skinhead named Eric.
Worse yet, any mention of the fact you were only serving a 28 day sentence for poll tax non-payment.
Woolworths. No more piss covered fingers grasping for the pick 'n' mix as if getting a heroin fix.
Sporting on the green.
Any foo' who be saying "Don't Stand Me Down" is a better album than "Searching for the Young Soul Rebels". They trippin'.
Waggishly referring to the Queen's Speech as The Regina Monologue. Repeatedly.
Sick sex sects that slay six.
"Embedding disabled by request".
That telly advert with the dispiriting version of "From me to you" on it.
Momo Sissoko dissing Moloko.
Mistakenly presuming that what your work colleagues really, really want is a daily progress report vis a vis your Christmas shopping, decorations, trees, lights, cards et al.
Spending a valuable couple of hours of one's life sifting through the festive television schedules and picking out likely looking shows, all the while knowing in your heart of hearts that you will be out drinking.
Those little pots of yoghurt that are supposed to stop your turds from stinking. No dam' good.
Tiresome salad-dodgers relating the unexpected news that their Wii Fit reckons they should lose weight. Surely a mirror would have been a cheaper, yet similarly accurate diagnostic tool?
Anyone wearing those spoddy mountaineer type trainers rather than the fine products of Messrs Adidas and Nike.
Constantly adjusting your tie and jerking your neck like an ill-at-ease member of the "Ready Steady Go" audience.
Earthy Christmas dinner table references to sprouts and their effect on the digestive system. Keep it clean, there's a love.
Naked calendars. Put it away, you fat biffer.
The Wise Man who brought gold to the manger after the three of them had agreed not to spend too much on their gift for the saviour. Flash prick.
Going on and on about your Gap Year Travels. You had the shits, got fucked on a beach, saw some sunsets and your feet hurt. We get the picture.