I Smell a Rat!

It is always the intention of this proud organ that we treat everyone with respect and even-handed justice.

In the matter of the Radio 2 telephone call scandal that is rocking our nation to its core, it is possible that the casual reader may have inferred that blame lies firmly and squarely in the lap of the two sniggering, well-paid celebrities leaving offensive messages on an old man's answering machine.

A vapid and fatuous conclusion to come to. What are you, some kind of Dail Mail reader, eh?

To keep it real and simultaneously boil it down to brass tacks, then.

First of all, this is the grand daughter in question. 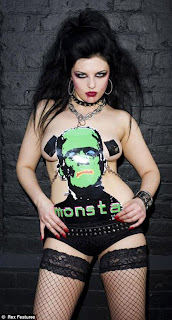 Now, I realise that the good people reading this are not the readership of "Nut" or "Zoo" magazine. However, I put it to you, sir, and even you, madam, that if you had schtupped the young lady pictured above, you would be letting EVERYBODY know.

You'd be on the phone to your dreadful mates, you'd have updated your Face Book status, contacted the local press, the whole shebang. Don't deny it, I know what you're like, you filthy pig.

Indeed, I would probably have investigated the feasability of having the salient information inscribed on one of those billowy advertisements that light aircraft used to drag behind them in comic strips in "The Beano".

Among gentlemen of the world such as we, Brand's indiscretion is surely pardonable, if not particularly becoming.

There has been a lot of Tommy and an equal amount of rot spoken about the so-called "victim" in this affair. To wit, national treasure Andrew Sachs.

Much play has been made of the fact that the silver-haired old dear is almost 80 years of age, as though this somehow makes the whole affair infinitely more terrible.

Well, forgive me if my views are those of a hidebound old fogey, but surely in the whole arena of "fucked-granddaughter-disclosure" phone calls, older is better, no?

Would these politically-correct Guardianistas prefer it had Brand been intimate with the granddaughter of some sprightly young fellow in his early forties? Is this the society we live in today?

They should bring back National socialism. I'd gladly pull the lever myself.

A final thought on Anthony Sachs. It is all too easy to bandy around terms like "respected actor" and "legend of tv comedy", but what is this towering legacy based upon?

Playing a comedy foreign waiter in a sitcom OVER THIRTY YEARS AGO, that's what. What has he done for us since then?

I can sum it up in one word for you: Jack Shit.

Some voiceover work, a couple of tiny film roles and a few plays.

Well, far be it from the likes of me to moralise, but if that's all he's been doing for the last thirty years, the least he could have done was take more of an interest in his lickle granddaughter. Maybe if he'd played more of an active role in his family life, she wouldn't be cavorting around on stage in fetish gear, performing unnatural lesbotic acts with pros in low budget movies, getting scuttled by harry rampesque funnymen and generally acting like a painted harlot, some say WHORE. 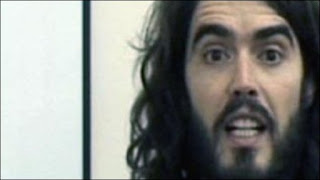 Whether you love him or think he's an over-rated squeaky-voiced cornhole, you literally can't ignore him.

Regardless of whether you think he's really, like, funny and that or think he should stick to hanging out the back of impressionable, star-struck young lassies, then gibbering excitedly about it in his shit stand-up act, you can't deny that the fellow ruffles feathers wherever he goes.

What is less well-known is that, prior to Manuel-gate, Brands, 33, has a long and inglorious record of playing off-colour tricks on minor celebrities.

Indeed, it is often said of crafty-combing, tight-trouser enthusiast Brands that he is never happier than when unleashing some sub-Beadle lo-jinks on an unsuspecting member of the showbidness fraternity.

Today, we list them so that you, the reader, can attempt to fathom the mindset of the man they're all calling "that fucking knacker with the hair".


Top Ten Russell Brand Pranks am here!
10. Ordered loads of pizzas to be delivered to the house of Eagle-Eye Cherry.

9. Left a message on Ken Dodd's answerphone informing him that his father's pet dog had choked to death on a jam butty.

8. Punched the former bassist from These Animal Men quite hard on the upper arm, reportedly "getting me right on my BCG scar".

6. Pestered Kate McCann for her phone number at a "Find Maddie" press conference, then put the word around that he had gotten his "tops and fingers" off of her.

4. Got Bob "the cat" Bevan all hepped up on milk stout and made him dance for coins in front of jeering Soho clubmen.

3. Every single day for a year after she had her baby, texted the single word "Thunderthighs" to brave olympian pants-shitter Paula Radcliffe.

2. Duped Dexter Fletcher into believing they were bringing back "Press Gang" for an adult audience and he'd get to do Julia Sawalha on screen.

1. Pissed the words "Wrinkley Titts" into the snow outside the home of "Calendar Girls" actress Celia Imrie. 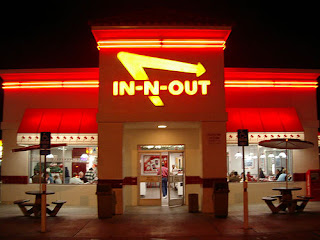 You want examples of things that are "In" and that are "Out"? Well, dang it, I'll try to find you some and I'll bring 'em to ya!

A little American political "humor" for y'all there. In stark contrast to such colonial cornholery, the meetings of the Committee are, if anything, reminiscent of the Ancient Roman Senate, where Cicero and Luca Brasi would trade witticisms across the floor. This way alone can one differentiate the Gangsta Style from the Rob Styles, the Sonny Liston from the Sunny D, the John McClane from the John McCain.

Ready for the floor and in town to get down, lads and lassies, get out your seats 'cos Ins and Outs am here!

Chilling out, maxin’, relaxin’ all cool and all shooting some b-ball outside of the school.
Tight orange vests. Hello boys!
Kneading your ballsack, knocking back Prozac.
Laughing uncontrollably when presented with a photograph of somebody's new baby or significant other.
Branding any of your dreadful mates with fingernails that aren't cut right down to the quick as "Flo Jo".
Having a full and frank exchange of views regarding the Rothko exhibition at the Tate Modern with the young lass at the grooming parlour who shampoos your Bichon Frisé.
Accepting with good grace that the Lord, in his wisdom, has rather put you behind the 8 ball when it comes to looks.
Giving colleagues and acquaintances the impression that you are a crazy, "out there" sort of a chap by stating your intention to go out for "a pint... ...or ten!!!"
Ice cream. Yummy!
Unplugging the phone, uncorking a decent Malbec, lighting a fat old cuban and settling down to an evening watching an entire week's supply of Sky-Plussed "Sexcetera".
Anything that has been remixed by Soulwax.
Taking a certain grim satisfaction in rejecting Facebook friend requests from shithouses.
Prolific, yet intermittent, use of the phrase "Usually drink, usually darnce, usually bubble!" in a fake B-Boy accent.
ClO- (aq) + 2 H+ (aq) + 2 I- (aq) ---> I2 (aq) + Cl- (aq) + H2O (l)
The pleasing post-credit crunch prospect of Jeep-driving property developer dilettantes being left potless.
Counting the days until the next issue of "OK" magazine hits the news stands as you are worried sick about the state of Jordan and Peter's marriage.
Ageing pub doley types, pairing their raggedy old suit with the latest white Lonsdale daps for an elegant yet sporty look.
Larger ladies who proudly thumb their noses against society's narrow-minded prejudice against exposing vast areas of fat back flesh.
Going for a coffee enema and asking the woman to put two sugars in it.
Telling your elderly grandparents that they have to rewind the film they've just watched on their new DVD player all the way back to the start.

Being written out of the will.
Any gentleman who, despite the experience of thirty summers on this earth, chooses to appear in public clad in a t-shirt bearing the legend "G Star Raw".
Referring to your car as "the old jalopy"
The X Factor. Karaoke for cunts. Karaoke, then.
Ill-advisedly purchasing a CD from pan-pipe toting faux-Peruvian Inca types on the High Street.
Haberdashery. The worst kind of dashery.
Inviting your mates back to your bothy for some nourishing stovies and neeps, before remembering that you aren't a scotch shepherd and, moreover, you are currently residing at the YMCA.
Maxillary palps.
Glassy-eyed fellows, shopping on a Saturday with their lasses, while wearing an ironic Mr Men t-shirt. Mister Pussywhipped, more like!
Laborious conversations regarding the paucity of televisual entertainment on a Tuesday evening. Here's a suggestion from left-field: Don't watch the cornholing telly every bastern night.
Home-made pornography. Has anybody ever sat back and watched one, critical faculties akimbo, and concluded "Yes, that's some good work right there. Mother, the red tube!"?
Bandy-legged busty bints bingeing on brisket and Bacardi Breezers in a Bristol brasserie.
Armchair food critics, whose breezy opinions on the merits and demerits of the TV master chefs are only slightly undermined by never having tasted a morsel of their food.
Any single thing whatsoever to do with Hal O' Ween, or Guy Fawkes Night, as our stateside cousins style it.
Playing "air guitar", ironically or not, to soft rock. The province of the "necktie-as-rambo-headband-at-wedding-do" type of wassock.
Dishevelled public transport users, prone to soliloquising.
Complaining to anyone who will listen that "I ain't no gynaecologist, but I work with a load of cunts".
The novels of George Eliot. A lass could have written them!
Getting all foamy at the gash at the prospect of eating a "Wispa" or some other re-launched confectionery product. It's only a chocolate bar, pet.
Notoriously slippery prison issue soap. They should install wall-mounted liquid soap dispensers in the showers instead. Far more sanitary. 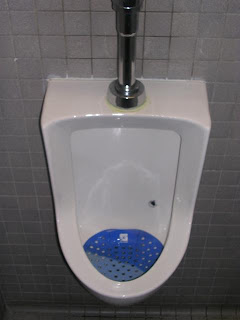 Holler atcha, homes, it's your boy. You good? Splendid. I currently have water on the brain, so I have to pass it on to you, so to speak. Today's posting is brought to you by the letter "P" and the number "5".

It is an undeniable fact of life that, when drinking heavily in public houses, you will eventually need to pass water, hopefully in the confines of the lavatory.

If you are a member of the distaff side of the species, this will take the form of a minor jamboree with one or more of your closest friends. Once ensconced in the smallest room, you will re-apply cosmetics, replenish your drinks from the Roller Cola bottle of bacardi in your handbag, bitch about the fat arses and loose morals of the other members of your party and, time permitting, even have a wee. A pleasant and fruitful interlude in the evening.

However, the male is a solitary, roaming creature, unwilling to share this private moment with even his closest bosom companion. He goes it alone on matters micturational and any expedition to the WC is therefore a solitary venture.

Notwithstanding this pioneer spirit, it is still vital that your compadres are kept fully informed of your movements. There is always the chance the unscrupulous round-buyer will attempt to lighten his fiscal outlay by claiming that he thought you had gone home. Thus you must tell your friends of your plans to visit the gents.

As with most male behaviours, there is a tiresome, blokeish procedure to follow. In this case, we shall refer to it simply as the "Pub Post-Pint Piss Progression". The five pees, if you will. Utter the relevant phrase to one of your dreadful mates as you depart for each "comfort break".


The five Ps. Learn them and stay safe.