Drinking With The Stars

We all love drinking booze, that's a known fact.

But spare a thought for the stars of stage and screen. Soap actress, washed-up ex-sportsmen, Big Brother contestants and strumpets who Darren Day has schtupped.

Whereas you or I are happy to take pot luck, gleefully downing methylated spirits, brasso, brake fluid or , in an emergency, Foster's, the rich and the famous will only sip on concoctions that rhyme with their name.

Yes, that is a true fact, actually.

Anyhoo, enought with the contrived exposition, let's get on with the listin'.

First up, attempting to catch the barman's eye:

Ladies darts? The smartest of blarts:

Huddled round a table, it's the resident wine conoisseurs:

The teenage scratter alcopop crew, scratching their names on the furniture:

The local toughs and scruffs, looking for a tear-up:

Finally, huddled in the snug, it's the local wife-swapping group, getting outside a couple of snifters before retiring home for a swinging good time:

Taches to Ashes, Dust to Dust 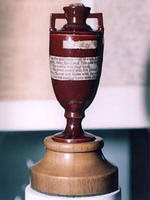 Greetings, dear reader. Pull up a chair, what I have to say may shock you.

There is no easy way to tell you this, so I will come straight out and tell you. Tache Club is over. The CK top lip has been shorn and shaved, I am once again a fresh-faced late-twenties cove.

There, there, my pretties, do not get upset. Of course, you will want to know what lead to the downfall of such a thriving, successful enterprise. Well, as with any tragedy, the contributory factors are numerous.

Firstly, January being traditionally a time of austerity and abstinence, not enough quality time was being spent in the local pub, the hub, some say focal point for the group. The loss of the support network provided by one's hairy-faced colleagues lead to a fatal weakening on the part of the members with females in tow.

Secondly, as mentioned above several participants proved to be, how do you say, Pussy Whipped!

Whipped, I tells yer. A week or so of not unmanly growth and the distaff half of the sketch is fussin' and a-cussin' and threatening a cessation of carnival relations. And what is our brave boys' response? Why, they belly up like cowardly weasels and shave off their taches. Disappointing.

Finally, we come to the last group of no-nonsense he-men who lasted almost two whole weeks of intensive beard-culture. What could cow these heroes into submission?

The realisation that taches are shit, actually. They look rubbish, they are itchy, they frighten small children and they get in your pint.

Also, if one goes about the place sporting a restrained, finely trimmed effort such as the one pictured in the preceding post on here, one is roundly choi-oiked and upbraided by all manner of half-wits and impudent fellows. Honestly, the nerve of some of these loutish wiseacres, it beggars belief.

As well as being the subject of impertinences in public saloons, there was also virtual interweb bullying to take into account. The picture below was sent to me mere hours before I took up my razor and ended it all. However, before I had taken the final, drastic measure I received a telephonic textual message informing me that with the surrender of the last remaining competitor I was the last man standing. An unbeaten, unbowed, bloodied warrior, if you will.


Ladies and gentlemen, my dear, dear little moustache, the subject of finger-pointing and ridicule, had triumphed over bigger, bushier, more luxuriant foes. If this isn't a metaphor for the struggle of the good and righteous man in this babylonian world of ours, then I don't know a metaphor when I see one.

By which I mean, of course, Happy New Year and so forth. I trust you all had a suitably festive time at the back end of 2007 and are "feelin gr8 in 2008", as the happy-slapping young folk would have it.

Between ourselves, I have recently found the whole Xmas/New Year shemozzle to be a bit of a bore, a drag, a spunk-drinking festival, if you will. With no disrespect intended to any of the fine people I spent time with recently, for pure unalloyed, simple pleasure, the bowel movements I had on Christmas evening and December 28th were the undoubted highlights of the entire holidays.

That can't be right, surely?

However, the beacon of hope that saw me through the more trying moments of Chrizzo was the knowledge that January would see the commencement of Tache Club.

Yeah, Tache Club. Pretty sweet, huh? You probably don't have an inkling of a clue as to what Tache Club entails, so I will break it down for you.

It's a society formed of the chillingest, illingest, beer-swillingest gentlemen from my local booze-hole. Here, foppish dandies and stylish Alpha male types can congregate in a cordial atmosphere and cultivate a roguish moustache. "TC", as the papers are calling it, will run throughout January, concluding with a prestigious soiree on February 1st, where prizes of fabulous value will be awarded for accomplishments of bushiness, originality and sexiness. Book your seat early, as it is anticipated that all of those competing will have women hanging off us like fruitbats.

The rules of the club are fairly simple.

The first rule of Tache Club is: Don't shave your top lip.

The second rule of Tache Club is: Don't replicate rule 1 for rule 2. That's the way of the fool. The type of weak-ass shit that Chuck Palahniuks might come up with.

The third rule is that members must be clean shaven on New Years Day, after which they are allowed full beard and tache growth for one week. Thereafter, the moustache must exist as a separate 'tache constituency.

This is to avoid mealy-mouthed cheaters simply growing a beard for a month then shaving it into shape for the big unveil. Shame on them, that is not the way of a 'tache-growing man.

Now, I will own that I am not the hairiest of fellows. Normally I am quite keen to avoid any suggestion of facial hair, instinctively feeling that it the province of the barbarian, the harry ramp and the heavy metal appreciator. Given this attitude, you may ask "Then why enter a club devoted exclusively to growing said fungus?"

This type of unworthy nit-pickery ignores the nature of men. We do these things because we can. Because we are stupid. Because it's fun. 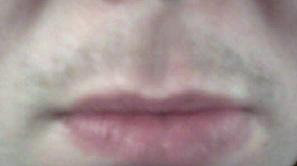 A thin, weedy caterpillar of a moustache, as seen on spivs and confidence tricksters. Still some way from the desired "Magnum" look.