Ins and Outs ...at Christmas! 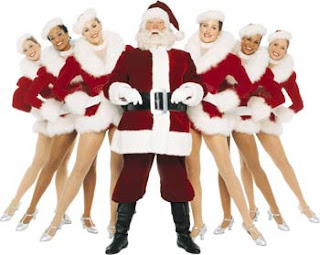 The Ins and Outs Committee, novelty antlers akimbo, have polished off the last of the eggnog, formed a quorum and bunged out another diktat regarding the upcoming winterval festivities.

Want to know your plum duff from your Damien Duff? Your pigs in blankets from your pigs in lipstick? Unable to tell "It's a wonderful life" from a thunder-faced wife?

Well point your sleigh this-a-way 'cos dem Yuletide Ins and Outs am here!

Watching bank clerks from Nat West on their Christmas lunch sitting front and centre in the window of the Gurkha Kitchen with mournful expressions and paper hats whilst local urchins outside give them the wankers salute.
World's Strongest Man. The festive period isn't complete without the sight of European no-necks carrying massive boulders about and doing chin-ups in warm, sunny conditions.
Eschewing the hysterical vapourings of a meddlesome government bureaucracy concerning nutrition, e numbers and so forth for the more measured advice of working mum Kerry Katona, and spending one's entire Christmas food dollar at Iceland.
Genuinely preferring "Escape to Victory" to "The Great Escape".
Monging in a hungover state through the Royal Institution Christmas Lectures.
Bachelors spending Boxing Day preparing a princely repast of two Pepperamis and some Doritos, washed down with a cheeky Special Brew in front of a collection of Electric Blue videos, recovered from the shed for just such an occasion.
ODing on twiglets.
Christmas Day social club garish knitwear and pungent aftershave overload.
Half-cut dads playing with their kids' toys late on Xmas Eve.
Compulsively guzzling an entire box of chocolates in one sitting while watching a Carry On film.
Mince pies. Sweeter than bear meat.
Regrettable last-minute purchasing of really whorish, low-quality underwear for your lass.
Lalique tree decorations from Bloomingdales. To DIE for, darling!
Getting all boozed up at your work do and ending up making sweet, beautiful love with the fat lass from the post room. No possible scope for future embarrassment and awkwardness there, oh no.
Sniffing poppers at midnight mass.
Popping down the petrol station on Boxing Day for a packet of fags, then on a pure whim buying an oxblood leather sofa from DFS. Nil per centum on the vig and nowt to shell out until 2011? Nice!
Making joke funnies that hinge on the linguistic ambiguity intrinsic to the notion that Santa empties his sack/comes once a year.
The reassuring feeling one gets from knowing that nothing more weighty is happening in the world of news than the Queen going to church on chrizzo morning.
Sending the Dudley Do-Right in your life a card in which you've written "I was going to give money to charity this year, but I saw this kick-ass card and it's just SO you!"
Asking your lass for "A gam and a gram" for your present.

Aled-up, scantily clad lasses from Friends Provident weaving their way down the High Street and giving a brother the skunk eye should his glance momentarily rest on their chests.
Waiting for the meat raffle in the Legion on Christmas Eve for one's turkey.
The recent tendency to incorporate shelling out on overpriced bratwurst as part of the Christmas experience.
Bucket-rattling bouncers.
Being pitied like a Romanian orphan because you live alone... ...at Christmas.
Telling all and sundry about the massive stock of bottled beer in your garage, including the various "deals" you got. It'll still be there at Easter, you boring bellend.
Getting the squits after excessive tangerine consumption.
New Year's Eve taxi tariff tubbyboohooing.
Being labelled a "Bah humbug" if you refuse to go along with just one facet of the suggested festive programme of one of your fatheaded work colleagues.
The unpredictable behaviour of a cracked nut.
James cunting Bond.
Grown men, well into their thirties, mark you, getting a Wii for Christmas. Unorthodox.
Pigs in blankets. You're cooking enough turkey and veg to sink a U-boat, why the fred funk do you need to bung some sausages and bacon in there as well?
Having a moody teen about the place who insists on playing their new DVD of "Funeral For A Cannibal Corpse's Fat Lass' Greatest Hits" on Christmas morning.
Wearing a Santa hat to the football.
Unimaginative office gals donning a pair of Christmas earrings and thinking it makes them as amusing as Dorothy Parker.
Scruffy American indie herberts and their wacky Christmas songs. Man, did that get old quick.
Mulled wine? More like a bastard!
Those wassocks that go swimming in the sea on Christmas mornings.
Elderly relatives with nothing better to offer to a guest than English sherry. You're alone with the cats and the smell of piss next year, tightwad!

Are you implying that you didn't care for my battery powered flashing Christmas tree earrings? Hmph!

is really whorish, low-quality underwear for your lass better bought last minute than in advance?

you are one funny bitch, colonel.

You my friend are a funny, funny man. You are too much as they say down this end of the world.

oh how I laughed.

You should get more comments than this. Your blog is well funny.

And now I shall forget all about it for another 2 months.