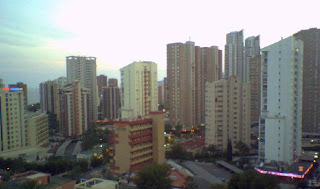 The breathtaking grandeur of the Costa Blanca coastline

Also, what's the deal with the upside down question marks these Spaniards use? Call me old-fashioned but I'm English and I like my question marks the right way up.
I'll bid you buenos noches.
Posted by Colonel Knowledge at 6/12/2007 09:18:00 pm

Hey you...I featured you in a post in my blog. Not that you deserve it or anything.