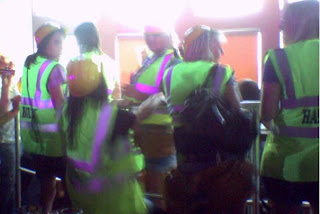 This season's "to die for" outfit, apparently.

You there! Fix up look sharp, I don't have all day.

Dear reader, today finds this late-teens raver in a fairly beleaguered state. The noggin is fairly pounding, the old bones feel weary and, most distressingly, the right eye is bright red and has been weeping like a teased vagina all day.

Quite the heart-rending predicament, what?

Yes, yes, all the brouhaha about that missing bairn and, to a lesser extent, the threat of it all kicking off in the environs of Korea, but really, let us not overlook the big picture here. Mammy's lickle soldier has a bit hangover and a sore eye. Tubbyboohoo.

Yesterday was a Bank Holiday in England, the third in the space of just over a month. To mark the end of the monday boozing season until August, there was a large music festival in Newcastle's busy Quayside area. This featured the likes of Maximo Park, Echo and the Bunnymen, The Enemy, Dumpy's Rusty Nuts, Chromeo and many, many more playing their rousing, foot-tapping rock music to thousands of thrifty music lovers.

However, nearby Whitley Bay had loads of pubs playing cheesy dance music and were absolutely full to bursting point with tidy boilers, some say blart.

A simple decision, I feel you will agree.

After an enjoyable cab ride enlivened by the driver's tales of debauchery in Prague - "One of the lads paid for twelver hoo-ers in a swimming pool for two hours. They did aal kinds!" - we alighted at the fashionable Bedroom four ale bar.

On the way to Whitley there had been much discussion of the ugly lass bus that comes and collects the less attractive females and presumably dumps them in a field somewhere. It is a common phenomenon that after a few hours swilling ale in the sunshine, all the girls are lovely girls. The only practical explanation we could think of was the ugly bus hypothesis, but if you can suggest an alternative reason do get in touch.

I am a man of science and facts are my stock in trade.

Surveying the assorted fauna in this bar, it was clear that there was no requirement for beer goggles today. There was nothing but attractive lasses as far as the eye could see. As I remarked to one of my dreadful mates "If a chap can't score in Whitley Bay, he's either a puff or a weirdo. I know which one I am*, what are you?"

As it turns out, he ended up hoying it up an ex-girlfriend at the end of the night so the question never arose.

At the next bar we encountered the drunkest woman in the world. A young lady who, through pluck and honest endeavour, had managed, by three o'clock in the day, to get so intoxicated she was incapable of standing unaided and proceeded to pinball around the crowded bar, bouncing off folk, spilling drinks and generally providing first-rate entertainment for all and sundry. Although she was eventually ejected by a door staff professional, she popped up in another pub about an hour later, still as gravitationally challenged as before.

What a triumph of the human spirit.

Another bar had a cheap drinks offer which involved us having to drunk orange or lemon flavoured alcopops. It's not as easy as it looks, you know, this getting drunk bidness. This bar also featured the disturbing sight of gangs of muscular straight men dancing to that awful Mika record about "trying a little Freddie".

Further down the road we met up with some of the famed Bedlington Ewok posse and an already drunken day kicked into overdrive. Bottles of poppers akimbo and expensive bottled imported lager in hand, we checked out the various female factions out on the dancefloor.

A gang of french maids were taking turns to dance suggestively with, and in one case fellate, an inflatable male doll with a fairly intimidating looking pipe on him. Meanwhile in another corner a party of bunny girls were positively foaming at the lips trying to get into some laid-back looking black men.

Elsewhere, a bunch of female construction workers in high-visibility vests and helmets were necking blue WKDs as though it were about to be outlawed.

That's what it's aal aboot.

We ended up at the bottom of the street in a particularly grimy place, even by Whitley Bay standards. However, while not the most chic of nite spots, it does have a raised stage where drunken lasses get up and pole dance, so we decided not to be too snooty about it's other perceived shortcomings. It was in here that we met three lovely and charming ladies from Seaton Sluice, who were clearly in the mood for fun.

Well, fun is just what they got, so long as you define "fun" as dirty dancing with a load of sleazy fellows with busy hands. In fairness, the touching-up tomfoolery was not a one-way street. As one of the group exclaimed "How lads, she's trying to wank us off on the dancefloor". Another chap, seizing the moment when two of the girls were rubbing their ample chests against one another, stuck his face into the midst of the mammaries and gave it the full "wubbawubbawubba" face-wobbling thing.

Clearly delighted with himself, he turned to me and said "Put that in your blog!" So I have. Don't dare a fool.

In another part of the same bar, another of the gang had found a pneumatic young lady in Daisy Duke shorts, vest top and thigh high boots, who was dancing a lascivious dance on a tabletop, while her even more well-developed mate stood by, distractedly tweaking at her prominent, enlarged nipples.

No wonder I've got sore eyes today. The only wonder is that they didn't pop clean out of my head yesterday.

Only three months until the August Bank Holiday. Giddy up!


*The correct answer is b) Weirdo. You probably knew that one.

Hit Parade am over here!

Tunes you can hum 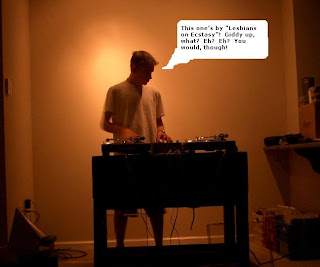 Also, those of you who have come across me in "real life" haven't had it easy either. A combination of strong, brown booze and somewhat unorthodox behaviour have been causing raised eyebrows and wrinkled noses all over the tri-county area.

However, in a gesture of rapprochement, I offer you the gift of song. Don't worry, I'm not going to whip out my battered acoustic and start serenading you, that would vile for both of us.

I refer, instead, to the gift of knocked-off mp3 music files, lovingly curated, collected and cobbled together for your listening pleasures.

Yes, stolen pop music, it doesn't get much more lavish than that, does it?


Something for everyone there, one feels. Whether it's the zeitgeist-straddling ultra hip pop of Dr Hook or Martha Reeves, the sweet soul stylings of Ganja Kru and Pussy Galore or the cosy guitar pop of Ghostface Killah, you'd need cloth ears to find nothing worthy of inspection therein.

Either that or you're the kind of wretch who enjoys the works of The Cold Play Band, in which case you can fuck right off.

Now for the science bit. You can download this collection from either Sendspace or Yousendit.

The file size is about 100MB, so it will take a while to download. Possibly you may wish to bake a cake or service your Vauxhall Chevette in the meantime. Whatever, trevor, I'm not into that whole "being prescriptive" bag, you just go for it.

It will download, eventually, as a Winrar Archive, which is a folder that you need to open with, you've guessed it, WinRAR. If you can't manage this then don't come tubbyboohooing to me about it, you technophobic putz.

I'm nearly 83 and I can manage it, so what's the matter with you? Are you a Benny or summat?


Have fun with it, pop kids.