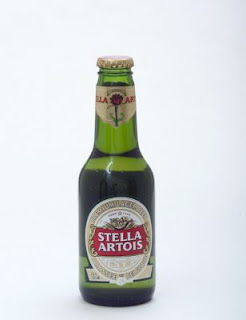 Oy oy, saveloy! Welcome back, boys and girls, to the 'blog that everyone is calling "essentially a four year long cry for help".
I joke of course. This fine journal is proof positive that the exciting world of the online diary isn't solely the preserve of the spod, the weirdo and the spinny-eyed looney. None of these charges could be levelled at your Colonel, I'm confident you will agree.
To bidness. First up, a cautionary tale. Sunday evening in a local saloon bar I felt it was time for a bit of an old party trick. The amazing feat that is Balancing A Bottle Of Stella Artois Atop One's Head.
Take a second and think about that. Imagine, a fat chap with a bottle of beer perched on his head, hands out to one side. A wondrous spectacle and no mistaking. Just the thing to give one's fellow revellers who are grimly drinking with both hands, trying to wring the last few drops of hedonism from the dying embers of the weekend.
Which, as anyone who has attempted to obtain liquid from embers would attest, is quite a big ask. Not the greatest metaphor, that one.
Anyhoo, while you're probably ahead of me here, I must confess that the stunt didn't go as planned. Possibly the bottle was defective, maybe my head is getting lumpy, but the balancing didn't really happen. The bottle crashed to earth, beer went everywhere and the assembled barflies, including at least two women, found the thing dashed amusing.
Far from being lauded and admired for my barroom acrobatics, I had ended up as a laughing stock, a putz, a worse than senseless thing.
I only hope that you will learn from my tale of hubris laid low and resolve not to be, as one observer pointed out, "such a fucking cock". At least then some good can come from this sorry episode.
A trip to Newcastle's busy town centre on Saint Patrick's day had earlier provided some happier moments. A night spent knocking back Guinness, Jagermeister and Tequila (in separate glasses) wound up with some ultimately futile attempts at seduction in the voguish Indie nightclub Bulletproof.
At this point one of my associates mentioned that a young lady with whom he'd been having an on-off, unconsumated relationship had been text messaging him informing him that she would be well up for boot-knockage/hide the sausage on Monday and possibly Tuesday evening, should he care to pop round.
A nice bit of boxed fruit, you might think. You would normally be quite correct, if not for the fact that my young friend, having been unwisely advised by someone who shall remain nameless, then texted the lady back with the question "Can I smash your back end in?"
Scarcely the language of Romeo or Galahad, what? I fear his dance card may remain unfilled for Monday and Tuesday night.
Until we next meet, I hope that your head is flat and smooth and that you get to smash in all the back ends your heart desires.
Increase the peace, beeyatches!
Posted by Colonel Knowledge at 3/19/2007 11:44:00 pm

You, my friend and colleage, have far too much time on your hands. Being such a fucking cock is an excellent way to fill that empty space and, as such, I fully reccomend you doing so as often as possible.

Yours in commerce (and blogging, I suppose),
Izzy

In response to your response to my response:
"Idiotry" is not a word, although it would do us all good if it was. "Obstinance," however, is most certainly a word. Perhaps it has only come into common use recently; in that case, I would not expect such a connisseur of the "good ol' days" as you to know of it.

Ah, one lives and one learns.

I prefer the simple grace of "obstinacy" myself, but it doesn't do to be too precious about words, does it?

Wonderful colonel knowledge, very clever trying to balance a beer bottle on top of your head, not! Where did you get such a brilliant idea, like a blushing teenage boy trying to win over the girls attention against the boy from the neighbouring house who usually always gets the girls attention…

This youtube video just came to my mind when I was reading your funny story. I hope you are not going to do the same again next time you go to the pub or this might happen to you http://www.youtube.com/watch?v=bhzFWQv1hGA The beer bottles revenge will be sweet. Be aware, lumpy head!

Sorry colonel knowledge, my link is not working, I'm a bit useless with computers...
But hopefully THIS ONE will work. Cheers!