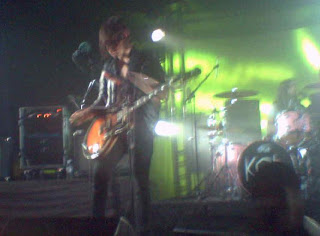 Whilst I appreciate that Folkestone needs an occasional infusion of free-spending out-of-towners as much as any South coast hovel, it puzzles me why your hirsuite heroes from over the water chose to favour the place with their visitation when many preferable - and indeed geographically convenient - alternatives were surely up for grabs?

Was it not the legend that is Mr Nate of Dogg that mused "is it cos they like my handsome face, is it cos they like my gangsta ways"? Granted, this line of monolithic proportion, crammed full of relevent social commentry, does appear on Ludacris's 7" single entitled Area Codes (i believe it to be from the hit motion picture Rush Hour 2).

Come on Colonel, sort it out!

Anonymous - if that is your real name, which I doubt. I blame the foul machinations of Ticketmaster and their ilk.

Ewok - You are of course correct.

However, let us not forget that not everyone reading this is as au fait with the cream of the hip hop crop as you and I.

Forgive my tendency to dumb down and pander to the lowest common denominator. I will endeavour to "up my game" henceforth.