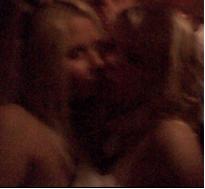 Oy oy, saveloy! How the hairy palmed hell are you all? I trust you fine firm-buttocked people had an enjoyable Bank Holiday weekend. I know I did, I've got the pictures to prove it.

Of course you're probably way ahead of me here, having read the post title and formed your conclusions in that clear-minded way you have. For the elimination of all doubt, let me confirm that I have been kicking my height in the hotspots and fleshpots of Blackpool, the Vegas of the North. And I'm here to tell you this: Blackpool is skill.

When you walk into a pub at half past three on a Saturday afternoon you expect a half-empty taproom with a few bar-proppers and pill-poppers gawping at Sky Sports News through a haze of roll-up smoke and onion breath.

Not so in da 'pool, you get a legion of cowgirls, bunnygirls, old girls and chaps in drag all boozing with two hands, groping each others arses and watching a limbo dancing competition. Within fifteen minutes of entering the first alehouse of the day, we had observed two lasses getting the girls out in the hope of winning an oversized bottle of non-vintage asti.

The prize was scooped by a chunky lass from Sunderland who was clearly living for pleasure alone. Having claimed her prize she helped strip some young chap who had been helping out with the limbo. Excellent behaviour we all agreed.

After several more equally fine bars followed by some burgers and chips, it was back to the guest house for a scrub and a clean shirt. We need not linger too long on the squalor of our hotel, life is an unpleasant enough business without dredging up images of clammy, flea-bitten bedrooms and piss-stinking lounges. Let us move on to more edifying matters.

It seems that your modern girl, when she gets her head into a pink stetson, forgets all her inhibitions.

Not for nothing, but it isn't every day that one gets goosed by a scouse lady wearing a ten-gallon hat emblazoned with "I'm gagging for it". More's the pity. Unleashed in such a bacchanalian atmosphere your geordie boys and yorkshire coves aren't backwards in coming forward either.

Anyone who has spent any time watching Granada Men and Motors will be aware of the sensational effects that pointing a camera at intoxicated female revellers can produce. This phenomena holds almost as true when one is wielding nothing more impressive than a camera phone. Check out the impressive result above, your Colonel is quite the David Baileys, eh?

Giddy up, I feel you will agree.

Another snippet of information the traveller may wish to store in the old memory banks is that there are several lapdancing bars on the seafront which offer free entry. Now, I'm sure that you disapprove of the whole lap dancing thing and so do I. These places are clearly frequented by only the lowest of the low; sad inadequate men who can't even get a woman in the bawdiest of low taverns that are, to coin a charming northern phrase, "waal to waal blart".

Also, the girls aren't allowed, by law, to get their fannies out in Blackpool establishments.

Anyhow, heading away from the gutter, the second day of our stay saw more drinking, more fry-ups, more chips and burgers in takeaways.

All of which high living has an inevitable effect on the digestive tract of the adult male. Wisely realizing that no real skirt chasing is going to be successful with a set of guts that is emitting toxic fumes, it was down to some heads-down, no-nonsense drinking, followed up with an extra portion of shouting on, breakdancing in kebab shops, communal singing and general oafery.

Now I may be wrong about this, but I believe that if that isn't what it's aal aboot, then the terrorists have already won.

I might have to have myself a trip down to that part of the woods at some point soon!

// 'Apparently'.. hmm.. I might to see that the lawis laid down appropriatly. Make sure it is as such! Haha!