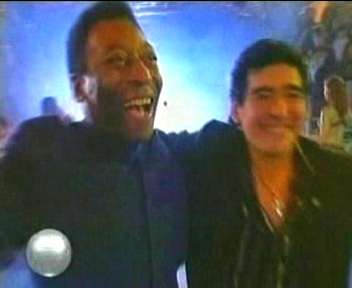 "Let's gan and dee some bars!"
As the World Cup rolls around the same old debate rages in taprooms and tapas bars all around the world. Who is the greatest player ever to grace the World Cup?

There are the occasional oddballs who will argue the claims of Michel Platinis, Johann Cruyffs or Peter "Monkey Heed" Reids. However, most right-thinking folk recognise that the only decision to be made is a straight choice between Brazil's Pele and Diego Maradona of Argentina.

We all know them, we all love them, we've all seen their skills on show in World Cups, but what of the inner man behind the public facade? This exclusive peek into the private diaries of both men may help you choose between two very different legends of the game.

I awake at sunrise in bed with two of Bolivia's leading weathergirls. I snort an enormous bump of cocaine from each of their navels. Now I can face the day.

After a brief swim in my football-shaped pool, I share several tequila slammers with my brother Manolo and three of Ecuador's finest mail-order catalogue lingerie models. Time for breakfast.

I take one of my 4x4 trucks out onto the pampas in my back garden. We espy a wild boar. I alight the vehicle, wrestle the beast to the ground and finish it off by gnawing through the beast's windpipe. As I am doused in gushing arterial blood I feel the exhilarating rush that comes only from besting one of nature's ferocious gladiators. And Class A narcotics.

"Bring the carcass back to the villa, we shall feast well tonight!" I roar to my brother Claudio. I must rest.

After a refreshing dip in the hot tub with four of Argentina's most beautiful "lads mag" regulars, I adjourn to my chambers to smoke fine Afghan hashish in my silk kimono while chatting with my brother Pedro.

For the evening there is a lavish party organised. My guests sip onlythe finest champagne and snort only the best Colombian snow. Guests of honour are Misses Argentina 1985-94 and 96-03. ('95 was found to be a man, Diego Armando Maradona is not Strange like that).

My brother Jorge and I go up on the roof and fire off automatic weapons. We are naked as gods, our manhoods swaying proudly in the moonlight. The local Chief of Police shouts up to me, "Hey! Maradona! You are crazy man. You in big trouble!".

As he is himself naked and lying in my hot-tub being fellated by the female host of Chile's leading childrens show "Blue Pedro", I am thinking that perhaps he is not entirely serious.

After I hack the head off a live cow with a samurai sword, we have a barbecue. There is fine brandy and speedballs aplenty. I end the night having cocaine blown up my sphincter by Brazil's leading "tv house makeover" bit of skirt. I sleep the contented sleep of a well-fed bambino.

Another day, another country. On monday I am guest of honour of the Cote D'Ivoire FA, where I will attend the final of the Under-15's FA Cup final. I am so privileged to have visited as many places as I have in my role of FIFA Football Ambassador.

The various FA dignitaries discuss the initiatives theyhave introduced at grass roots level. We ruminate on the prospects of the national team in the forthcoming World Cup. They ask me if it true that I can't get it up. I brusquely refuse to discuss the matter.

Tuesday I jet off to check out the facilities at Senegal's newest stadium. It is all very impressive, although it is certainly a far cry from Mexico in 1970, when I won the third of my World Cup winners medals, an achievement I am too modest to ever mention.

Yes, football (or "the beautiful game" as I call it) has certainly been the love of my life. Certainly a more constant and faithful love than my ex-wife, who left me for another man, amid groundless and hurtful lies claiming I left her unsatisfied in the bedroom and that I preferred the company of teenage rough trade.

There is a disturbing incident in my Tunis hotel on Wednesday night, after a gala reception thrown by the Tunisian FA.

Two ladies of the night (one white, one black) have somehow found their way into my suite. Despite their claims that they are a gift from my Tunisian hosts, eager to garner support for another World Cup host nation campaign, I usher them from my room.

Imagine the scandal if one of soccer's leading figureheads and, dare I say it, legends, was to be embroiled in a sex scandal. The implications for the game as a whole would be unthinkable.

A great entry but yet again you have made several glaring factual errors.

I trust heads will roll.

If you stop posting the Plagiarists have won.

I'm not really expecting a response to this.

Hatty - yes, I have died. You will have to raise our child alone, I'm afraid.

Damn. Are you sure that you can't take it? Otherwise I'm going to have to give birth and sell it on a market stall in Chester le street. Having babies doesn't agree with me.