Ladies and Gentlemen - "The Queen"

Booyakasha, bee-yatches. Get down and get with it. As you are no doubt aware, our glorious leader Queen Elizabeth the Second is eighty years young. To celebrate this fabulous news, Buckingham Palace have released eighty interesting facts about this most fascinating monarch. You can read them here.

However, call me a craw-thumping old monarchist if you want, but I went and came up with my own personal list to signify just what our sublime sovereign means to me.

Eighty Fabulous Facts about the Queen

1. The Queen, real name Elizabeth II: Electric Boogaloo, is eighty years old.
2. The Queen regularly hosts garden parties with up to one thousand guests who munch their way through twenty thousand sandwiches and 7 million litres of Panda cola.
3. The Queen really likes Panda cola.
4. Despite being eighty years old, the Queen has never complained about how fiddly the new five pence piece is. This is because she never carries cash.
5. The Queen lost her virginity in the back of a royal carriage, aged 18 to the Seventeenth Earl of Monmouthshire. He came on her tits.
6. Unlike her mother, who won the Second World War for Britain, the Queen has never seen military action.
7. The Queen used to have a sister, Margaret, who was a slag.
8. Many question the value of the royals, forgetting they bring billions of pounds worth of tourism business to this country.
9. Most of it pocketed by the royal family, charging gullible yanks twenty quid a pop to look around some musty old palace or country house.
10. The Queen has four lovely children; the big eared wassock, the horsey looking cow, the gay one and the dirty shagger who married the fat ginger.
11. The Queen has visited over 100 countries throughout the world. She only liked about three of them.
12. Tribal dances, what's that all about, eh?
13. The Queen has a private art collection worth several billion pounds. Privately, she prefers pictures of cartoon dogs playing pool or cards.
14. Fatman Scoop, Brooklyn Clan, Fatman Scoop, Brooklyn Clan!
15. The Queen has been married to hubby Philip for almost sixty years! They share a passion for jigsaw puzzles, gambling and golden showers.
16. Famously, the Queen had a steamy affair with Michael Fagan, a pissy-trousered mentally ill casanova in 1982
17. The romance ended messily when Fagan was caught titting up the Queen in her royal chamber and shot through the throat by a footman
18. During her gap year in 1946, the Queen worked as a bounty killer in New Mexico, rounding up over 17 bad men.
19. The Queen says no to drugs, fool!
20. Despite fears of avian flu, her majesty has no plans to stop eating swans.
21. Or sturgeon.
22. Other royal favourite foodstuffs include foie gras, devilled kidneys, sorbet and pickled onion Monster Munch
23. The Queen has visited over 15,000 hospitals during her reign. Every last one filled with dreadful whining common children.
24. During the 1970s, the Queen regularly attended all-in wrestling bouts at the Doncaster Gaumont Theatre
25. Her favourite grappler was Kid Chocolate, the gender-stereotyped makeweight tag-team partner of Big Daddy.
26. She wasn't quite so keen on Mick McManus, regularly bellowing "You fackin' cant!" at him from ringside
27. On safari in Africa, her majesty bagged a rare Giant Panda. The staff at Dakaar Municipal Zoo weren't best pleased, but couldn't really kick up a fuss.
28. Because she has to, the sovereign regularly takes tea with the Prime Minister of the day. What is less well known is the fact that she hockles in the tea.
29. The Queen has size five feet, but takes a six for football boots.
30. Prior to her marriage, she had a hen party in Edinburgh. Pissed up on pink gins, she mooned astonished passers-by from the upper deck of an open-top omnibus.
31. There are rumours that she sucked off a doorman round the back of The Gilded Oyster dancehall, but many experts claim this was Margaret.
32. Unlike her mother, the Queen has never choked on a fishbone.
33. At eighty years of age, she still has all her own hips as well.
34. The Queen is blessed with incredible acceleration, reaching speeds of sixty miles per hour when in pursuit of a Thompson's Gazelle.
35. Or rushing to put a bet on.
36. There have been numerous portraits of the Queen over the years, the most controversial by Dutch artist Dirk Bocksjury which depicted the monarch being taken from behind by Italian actor Rocco Siffredi.
37. Oddly, Bocksjury's next work, which showed Sarah "Melons" Ferguson engaging in a "chocolate sandwich" attracted remarkably little condemnation.
38. The Queen is the third most popular royal of the twentieth century, trailing behind The Queen Mother (God bless her) and Diana "Queen of Hearts" Lady Di Spencer.
39. An ardent music fan, the Queen's favourite composers include Mozart, Beethoven, Gilbert & Sullivan, Eric Clapton and the Aphex Twin.
40. During the 1980s, the Queen spent one summer as piano roadie with The Lotus Eaters, playing the festivals, hanging out with the crew, all that shit. Good times, man, good times.


Well, that's forty done. Still reading, eh? Good show. I'd have a rest now, if I were you. Don't want to do yourself a mischief from too much thinking, do you?

Have a look at this photo of two puppies. Go on, savour it. 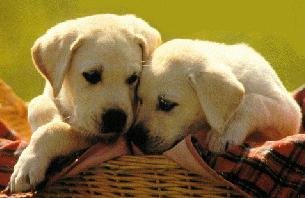 Ready to continue? Okay, let's kick out the jams, motherfuckers!

41. Although her love of Corgis is well-known, until recently it was hushed up that the Queen is in fact CORGI registered and installs all the boilers and heating systems in her various palaces.
42. She turns up on time, does a good, clean job and doesn't take the piss when it comes to charging.
43. The Queen's state visit to New Zealand was curtailed to allow her to return home to watch "Coronation Street" where Deirdre Barlows was doing a bit with Mike Baldwins.
44. The Queen's favourite type of Club biscuit is "Mint".
45. She jokingly refers to it as "the royal Mint"
46. Red-faced toadying journalist James Whittakers once soiled himself with laughter upon hearing this joke funny.
47. The big bloated, pompous turdtwister that he is.
48. The Queen once made a cameo appearance in popular US hillbilly car-chase drama "The Dukes of Hazzard". She played Uncle Jesse's stuffy english cousing, the Duchess of Hazzardcestershire.
49. It wasn't very good.
50. Another popular american 80s show was "Hardcastle and McCormick" but the Queen was never in that.
51. Or "Knight Rider".
52. A keen film fan, the Queen regularly attends swanky premieres. However, unlike most stars there is no scrabbling horde of papparazzi trying to get an upskirt shot of her beetle bonnet as she alights her limousine.
53. Urgh.
54. Among her favourite films are "Chariots of Fire", "Ben Hur", "Gone With the Wind" and "Black Bro's Banging White Ho's 3"
55. Not really. She didn't enjoy "Ben Hur" at all.
56. The Queen has never eaten a Twix in her life.
57. She recently presented Channel 4's "100 Greatest TV Adverts Ever!". Jimmy Carr was fucking livid.
58. Hoffmeister's "Follow the Bear" campaign was number one.
59. Her show-stopper at karaoke nights is to do all the voices to Jive Bunny's "Swing the Mood".
60. While visiting New York, the Queen survived an attempted drive-by shooting attempt, believed to have been orchestrated by Suge Knight, who for some reason got it into his head that she had gunned down Tupac.
61. Other celebrities famously not assassinated by the Queen include Diana, Queen of Hearts, Dodi Fayed and Paul Henry, former Crossroads simpleton Benny.
62. The Queen is a black belt, third dan, in kung-fu. She has her own dojo and everything.
63. In 1984, she delivered a knockout roundhouse kick to the head of Queen Beatrice of the Netherlands, claiming the title of European Monarchy Martial Arts Master.
64. Despite owning over 72.8 cars, the Queen cannot drive!
65. Instead she prefers to go everywhere in her own personal train, where she gets free newspapers and complimentary tea or coffee and biscuits.
66. Nice ones as well, choc chip cookies and that.
67. She said listen John, I love you but there's this bloke I fancy. I don't want to two-time you, so it's the end for you and me.
68. In 1985 she appeared as a panellist on "Round Table". Her pick of that week's releases was Amazulu's "Excitable".
69. She said the production was "excellent" and "It would probably sound really good in a club".
70. Richard Skinner chose "We built this city on Rock 'n' Roll" by Starship.
71. Shortly after this, "Round Table" was replaced by "Singled Out" presented by Janice Longs.
72. Janice Longs is the sister of Noel "no beard more tidy" Edmonds off of "Keith Chegwins'SWap Shop"
73. The venom of a Queen is ten times more deadly than that from the cobra. There is no known antidote.
74. In 1968 when one of her corgis was impregnated by a jack russell terrier, she solemnly stoved in the heads of the resultant puppies with a spade.
75. The Queen entered the Eurovision Song Contest in 1970, coming second to Luxembourg.
76. The Queen must eat her own body weight in quail's egg every day in order to survive. She keeps them in her handbag, which must be replenished every two hours.
77. The Queen has never broken wind in her life. A housemaid reaches up and slides them out while she sleeps.
78. Saturday night, I feel the air is getting hot, Like you baby. I'll make you mine you know I'll take you to the top, I'll drive you crazy.
79. The Queen? More like a bastard.
80. Gawd bless you ma'am, may your empire last for a thousand years. That would be skill.

You can probably be exiled for this...